At the end of March, NVIDIA held the GTC 2018 conference (GPU Technology Conference) in American San José. Among others, novelties in the field of computing using GPU accelerators, machine learning, and AI were presented at the conference.

Indeed, this year’s conference offered a lot of novelties. To those interested, we recommend watching the entire GTC 2018 keynote video prepared by the co-founder and general director of NVIDIA, Mr. Jensen Huang – traditionally dressed in a leather biker jacket:

What were we intrigued by?

At the GTC 2018 conference, NVIDIA presented the successor of their flag graphic accelerator for the field of machine learning – NVIDIA V100 with a 32GB memory (which is twice the capacity of the original card). Another novelty is a complex system for machine learning — the NVIDIA DGX-2 server. It is the successor of the first concept by NVIDIA within this field (DGX-1). DGX-2 concentrates the performance of sixteen newest Tesla V100 32GB accelerators into a single server, which was also presented at the GTC conference. Parameters of NVIDIA DGX-2, which boasts the most powerful machine learning system in the world!

Other interesting news and observations from the GTC 2018 conference

Another interesting thing was the extension of the support to applications running in the containers above the NVIDIA GPU cloud or an HPC cloud for HPC visualisation. The combination of NVIDIA DGX-1, Pure Storage, and Arista switch – known as AIRI (i.e. AI ready infrastructure) was also very interesting. 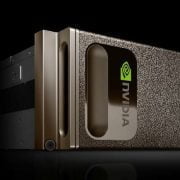 Running with Světluška
Scroll to top